Planetary scientist Bruce Murray became director of the Jet Propulsion Laboratory (JPL) in April 1976, just three months before Viking 1 was due to land on the northern plains of Mars. Though NASA's Langley Research Center managed Project Viking, JPL included Viking Mission Control. When Viking 1 landed, JPL could expect to play host to hundreds of journalists from all over the Earth.

According to his 1989 memoir Journey into Space: The First Thirty Years of Space Exploration, Murray saw this as an opportunity. He quickly assembled a group of six engineers to propose planetary missions that he could pitch to the journalists and, through them, to U.S. taxpayers.

The missions, which Murray dubbed "Purple Pigeons," were intended to include both "high science content" and "excitement and drama [that would] garner public support." They were called Purple Pigeons to differentiate them from "Gray Mice," unexciting and timid missions which Murray felt would help to ensure that JPL had no future in the space exploration business. By August 1976, the Purple Pigeons flock included a solar sail mission to Halley's Comet, a Mars Surface Sample Return (MSSR), a Venus radar mapper, a Saturn/Titan orbiter/lander, a Ganymede lander, an asteroid tour, and an automated lunar base.

The Purple Pigeons effort continued even after Viking 2 landed (3 September 1976) and all the journalists went home. In a February 1977 JPL report, for example, JPL engineers described a Purple Pigeon mission that would explore Mars with up to four rovers simultaneously. The Viking-based multi-rover mission would include a pair of identical 4800-kilogram spacecraft, each consisting of a Viking-type orbiter and a 1578-kilogram Mars lander bearing twin 222.4-kilogram rovers. The rovers would, the report stated, perform traverses to "regions difficult to reach by direct landings." This would, it added, fill the gap between "detailed information" from MSSR missions and "global information" from Mars orbiters.

The image at the top of this post shows a somewhat different (probably later) multi-rover mission design. Its four six-wheel, multi-cab rovers (two of which are operating out of view over the horizon) rely on a single Viking orbiter-type spacecraft to relay radio signals to and from Earth. In principle, however, it is identical to the early multi-rover mission design described in this post.

Most MSSR plans of the 1970s assumed a "grab" sample; that is, that the stationary MSSR lander would return to Earth a sample of whatever rocks and soil happened to be within reach of its robotic sample scoop. The report suggested that the rovers of the multi-rover mission might enhance a follow-on MSSR mission by collecting and storing samples as they roved across the planet. After the MSSR lander arrived on Mars, the rovers would rendezvous with it and hand over their samples for return to Earth. The report contended that its multi-rover/MSSR strategy would be "an enormous advance over even multiple grab samples" collected by MSSR landers at widely scattered sites.

At the time the Purple Pigeons team proposed the multi-rover mission, NASA intended to launch all payloads, including interplanetary spacecraft, on board reusable Space Shuttles. The Shuttle orbiter would be able to climb no higher than about 500 kilometers, so launching payloads to higher Earth orbits or interplanetary destinations would demand an upper stage. The powerful liquid-propellant Centaur upper stage would not be ready in time for the opening of the Mars multi-rover launch window, which spanned from 11 December 1983 to 20 January 1984, so JPL tapped a three-stage solid-propellant Interim Upper Stage (IUS) to push its Purple Pigeon out of Earth orbit toward Mars.

After an Earth-Mars cruise lasting about nine months, the twin multi-rover spacecraft would arrive at Mars a week or two apart between 16 September and 27 October 1984. They would each fire their main engines to slow down so that Mars gravity could capture them into an elliptical orbit with a periapsis (low point) of 500 kilometers, a five-day period, and an inclination of 35° relative to the martian equator.

The multi-rover landers would then separate and each fire a solid-propellant de-orbit rocket at the apoapsis (high point) of its orbit to begin descent to the surface. Landing sites between 50° north latitude and the south pole would in theory be accessible, though the need for a direct Earth-to-rover radio link would in practice prevent landings below 55° south.

The landers would each be encased within an aeroshell with a heat shield for protection during the fiery descent through the martian atmosphere. The aeroshell would have the same 3.5-meter diameter as its Viking predecessor, though its afterbody would be modified to make room for the large cooling vanes of the twin rovers' electricity-producing Radioisotope Thermal Generators (RTGs).

After the landers touched down, the orbiters would maneuver to areosynchronous orbit. In such an orbit, 17,058 kilometers above the martian equator, only minor orbital corrections would enable a spacecraft to "hover" indefinitely over one spot on the equator. Each orbiter would position itself over a spot on the equator near its lander's longitude so that it could relay radio signals between its rovers on Mars and operators on Earth.

The multi-rover lander, which would serve no purpose beyond rover delivery, would constitute a radical departure from the triangular Viking lander design, though it would use Viking technology where possible to save development costs. It would comprise a rectangular frame to which would be attached three uprated Viking-type terminal descent engines, two spherical propellant tanks, and three beefed-up Viking-type landing legs.

The 1.5-meter-long rovers would be mounted on the lander frame with their four 0.5-meter-diameter wire wheels compressed. Releasing a latching mechanism would permit the wheels to expand, raising the rover off four stabilizing "taper pins." The pins and one terminal descent engine would then swing out of the way, ramps would deploy, and the first rover would roll onto the rocky martian surface. The second rover would then ride a motor-driven "dolly" to the first rover's initial position before unlatching and joining its twin on the ground.

JPL envisioned that its four-wheeled rovers would each deploy a one-meter-tall boom holding a still-image camera, a floodlight, a strobe light, a weather station, and a pointable horn-shaped radio antenna. The camera/antenna boom, the tallest part of the rover, would stand about two meters above the surface. Controllers on Earth would then put the rovers through an initial checkout lasting at least two weeks. The checkout would culminate in slow "manual" (Earth-controlled) and faster semi-autonomous (Earth-directed but rover-controlled) traverses.

In semi-autonomous mode, operators would plan traverse routes and science targets using stereo images from the rover camera taken from terrain "high points," then would command the rover to proceed. The rovers might assist each other in traverse planning; for example, "high point" pictures from one might fill in blind spots in the other's field of view. "After the first few kilometers of traverse," the JPL engineers assumed, operators on Earth would "begin to build an intuitive feeling for the Martian geography and its impact on the rover capabilities, allowing them to plan better paths." The rovers would also photograph each other to enhance the mission's "general public appeal."

The rover mobility system would include one electric drive motor per wheel, eight proximity sensors for obstacle detection, inclinometers to monitor rover tilt, motor temperature sensors to judge wheel traction, a gyrocompass/odometer, a laser rangefinder with a 30-meter range, and an "8-bit word, 16k active, 64k bulk, floating point arithmetic and 16-bit accuracy" computer. The JPL engineers judged that their rovers would be capable of moving at up to 50 meters per hour over terrain similar to that seen at the Viking 1 landing site.

Alpha-scattering X-ray fluorescence and gamma-ray spectrometers would collect data while the rovers were in motion, but all other science, including imaging and sample collection, would occur only while they were parked. Each rover would gather samples using an "articulated arm" with an "electromechanical hand."

In order to avoid "an overabundance of data from a single track," the rovers would travel slightly different routes and rendezvous at the end of each leg of their traverse. They would, however, travel close enough together that each could aid the other in the event of trouble. If one rover became stuck in loose dirt, for example, its companion could use its articulated arm to place rocks under its wheels to improve traction. If one rover of a pair failed, the report maintained, the other would continue to yield "good, solid science."

The rovers would be designed to operate for at least one martian year (about two Earth years) to help ensure that at least one of the four could successfully rendezvous with the follow-on MSSR mission, which would leave Earth in 1986. Estimates of rover traverse distances in 1970s and 1980s studies were typically highly optimistic, and the multi-rover mission was no exception: each of the mission's four rovers was expected to travel up to 1000 kilometers. The JPL engineers concluded their report by calling for new technology development to ensure that adequate power and mobility systems would become available by the time their Purple Pigeon was due to fly.

Preserving and promoting the many dreams of spaceflight — online since 1996! 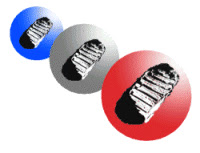 You can help support this blog and my other spaceflight-related publications and outreach education projects. I post new patron-only content nearly every day — now over 1000 patron-only posts! Includes access to The Sunday Space Brochure, a weekly look at historic informational print publications of space agencies and space contractors.