Electromagnetic Launching as a Major Contribution to Space-Flight (1950)

In the 1968 novel 2001: A Space Odyssey, British author Arthur C. Clarke invoked an old spaceflight concept to begin a voyage to the Moon. Dr. Heywood Floyd, a space agency bureaucrat, boarded a winged, reusable Earth-to-orbit shuttle mounted horizontally atop a winged, reusable booster, which in turn was mounted horizontally on a "sled" riding on an electromagnetic track.

The track used physical principles first studied in the late 18th century. It would not be too much of a stretch to think of it as a conventional rotary electric motor laid out flat, so that linear motion along a track replaced rotary motion about a shaft. The linear induction motor, as it is typically known today, was first studied as a means of launching aircraft by the Westinghouse Corporation in 1945.

Fifty-one years before the year 2001, Clarke outlined the limits of electromagnetic launching. In a paper in the November 1950 issue of the Journal of the British Interplanetary Society, he explained that a spacecraft could not attain Earth escape velocity of 11.2 kilometers (seven miles) per second on an electromagnetic launch track; as it gained speed, it would compress the air in front of it, subjecting it to aerodynamic heating sufficient to destroy it. He pointed out that the nose of the German V-2 missile had become "red-hot" at a speed of just 0.9 kilometers (0.6 miles) per second.

Even if the thermal problem could be solved, launching a spacecraft bearing a crew on an electromagnetic track was unlikely to be practical. Humans cannot withstand high acceleration, so a piloted spacecraft would need a long launch track. Even if acceleration equal to 10 times the pull of gravity on Earth's surface were deemed acceptable, the electromagnetic launch track required to reach Earth escape velocity would need to be at least 600 kilometers (375 miles) long.

In 1950, no one knew the chemical composition of the lunar crust. Clarke assumed that the Moon could supply both hydrogen fuel and oxygen oxidizer. As it turned out, he was right, though this fact was not confirmed until the presence of water ice in permanently shadowed craters near the lunar poles was confirmed in the late 1990s. Water can be electrolyzed (split using electric current) to yield hydrogen and oxygen.

The power system for the electromagnetic launch track would depend on a flywheel that would be spun up gradually over hours or days using an electric motor driven by a nuclear or solar electric power source. Clarke calculated that a 50-metric-ton (55-ton) flywheel 4.4 meters (14.4 feet) in diameter spinning at 1200 rotations per minute could, if coupled to a properly designed overload-tolerant generator, provide an average power over two seconds of about one million kilowatts. This would be sufficient to accelerate a one-metric-ton (1.1-ton) cargo to a velocity of two kilometers (1.25 miles) per second.

When electricity was applied to the track, acceleration would leap from zero to a "very high value" then decrease to 50 Earth gravities in just two seconds. This acceleration profile would dictate electromagnetic launch track length: it would stretch about three kilometers (1.9 miles) across the lunar surface. The track might be built on a level if no obstacles stood in its launch path; alternately, it could be built with a slight upward slope.

A propellant tank launched at two kilometers per second would slow to 0.78 kilometers per second as it reached the 3020-kilometer (1875-mile) high point (apoapsis) of its elliptical orbit about the Moon 2.5 hours after launch. If no further action were taken, it would reach the low point (periapsis) of its elliptical orbit five hours after launch traveling at two kilometers (1.25 miles) per second. Periapsis would occur on the lunar surface; in other words, the track-launched tank would crash.

Clarke calculated that firing a small rocket motor at apoapsis to accelerate the propellant tank by 0.22 kilometers (0.14 miles) per second would result in a circular lunar orbit at apoapsis altitude. He assumed that the rocket motor would expend propellants equal to only 6% of the cargo weight, a quantity he deemed "trivial." A spacecraft could then rendezvous with the cargo and pump the propellants into its tanks.

A space station might corral propellant tanks after they arrived in circular lunar orbit, perhaps using small auxiliary vehicles. Spacecraft traveling in cislunar space could then rendezvous with the station to refuel.

Alternately, the electromagnetic launch track might accelerate the tank to a slightly higher velocity, boosting it into an elongated elliptical orbit with a period of days. This would provide time for a spacecraft to rendezvous with its near apoapsis, where it would move very slowly. The empty propellant tank would be allowed to crash harmlessly on the lunar surface.

The electromagnetic launch track could, Clarke pointed out, place propellants mined and refined on the Moon into LEO at the cost of a 20% increase in launch velocity and increased guidance system complexity. The former could be achieved by lengthening the track and adding a "booster" flywheel/generator near its end.

Clarke cautioned that a lunar colony would need to be established and its "industrial potential" built up before lunar resources could be mined, refined, and fashioned into an electromagnetic launch track. "We are," he wrote, "rather in the position of trying to run a trans-Atlantic airline when there is no possibility of refueling. . .until we have drilled our own oil wells and set up our own refineries!"

The time needed to establish a colony and industrial infrastructure on the Moon might, in fact, mean that technological breakthroughs would make launching propellants from the Moon using an electromagnetic track obsolete before it could begin. Clarke argued, nevertheless, that "it is. . .well to keep the Moon-based electromagnetic launcher in reserve as a solution of the long-term problems of spaceflight."

The image at the top of this post is Copyright © The British Interplanetary Society (https://bis-space.com) and is used by kind permission.

Prelude to Lunar Base Systems Study I: Lunar Oxygen (1983)

Could the Space Voyages in the Film and Novel "2001: A Space Odyssey" Really Happen? (Part 1) 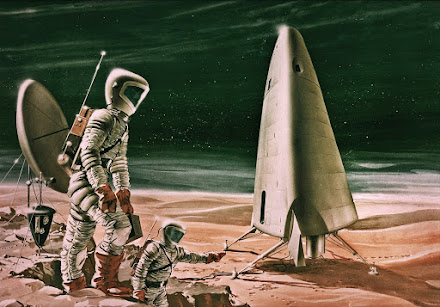